Technoblade, a massively popular gamer known for his Minecraft videos on YouTube, has died from cancer at the age of 23, his family announced Thursday. Photo courtesy Technoblade/YouTube

July 2 (UPI) — Technoblade, a massively popular gamer known for his Minecraft videos on YouTube, has died from cancer at the age of 23, his family announced Thursday.

His father read a message from his son, whose name was revealed as Alex, in a video message titled “So Long Nerds” posted to his account that has already been viewed more than 42 million times.

Minecraft, one of the most popular games in the world, is a multiplayer console and computer game in which players can craft their own structures and world-build in a three-dimensional environment. Technoblade was beloved for his kind and humorous videos playing the game.

“Hello everyone! Technoblade here. If you are watching this, I am dead,” he said in the message read by his father, who did not provide his own name in the video. “So, let’s sit down and have one final chat. My real name is Alex.”

Technoblade went on to apologize for “selling out so much in the past year” but thanked his fans for buying his merchandise.

“My siblings are going to college! I mean, if they want to. I don’t want to put any dead brother peer pressure on them,” he said.

Technoblade went on to say he would choose the same gamer tag again “every single time” if were to able to live another hundred lives.”Those were the happiest years of my life,” Technoblade said.

“I hope you guys enjoyed my content and that I made some of you laugh. And I hope you all go on to live long prosperous and happy lives. Because I love you guys. Technoblade out.”

His father said Technoblade was “the most amazing kid anyone could ever ask for.”

“I miss Technoblade. Thank you to all of you for everything. You meant a lot to him,” his father said.

In a statement provided at the end of the video, his family said that Technoblade “was always strategizing ways to delight and reward his audience – giving away online prizes, encouraging good sportsmanship, and most of all sharing his Minecraft adventure.”

Technoblade’s fans posted tributes to the “legend” in the comments of the video and other social media sites praising the gamer for his skill with phrase “Technoblade never dies.”

“Technoblade taught me to be grateful with the time I have on this world and to be positive always even in bad situations,” one fan wrote in a YouTube comment. “Thanks a lot Technoblade for setting an example for a kind, wholesome person everybody should follow.”

In a message posted to Twitter, Minecraft said that the company was “heartbroken over the loss of Technoblade.”

“He meant so much to our community and brought so much joy,” the company said. “He will be missed dearly.” 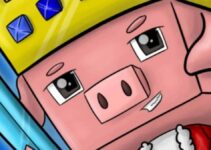