In a world ever more hungry for copper, a looming shortage could end green energy transition plans before they even get off the ground.

Copper is so central to transitioning from fossil fuels to sustainable energy, says a report from S&P Global, that worldwide demand is likely to double by 2035 from 25 million metric tons to 50; no matter the scenario, S&P said it’s unlikely the world will be able to meet it.

“The record-high level of demand would be sustained and continue to grow to 53 million metric tons in 2050 – more than all the copper consumed in the world between 1900 and 2021,” S&P Global said.

From oil to minerals

In a 2021 report, the International Energy Agency (IEA) described a new energy paradigm slowly replacing fossil fuels – minerals, the most important being copper.

Described in the S&P report as “the metal of electrification,” copper used in electric vehicles, wind, solar, and battery projects will drive much of the increase in demand. Infrastructure upgrades, like wide-scale deployment of EV charging stations, are also predicted to contribute.

The use of copper in electrified versions of traditional products – like EVs – is a massive contributor to the rise in demand, the study found.

Internal combustion vehicles of all sizes have around 24 kilograms of copper in their powertrains, the report’s data shows. Swapping internal combustion for fuel cells leads to a slight increase in copper, but swapping fuel cells for batteries is where things start to really scale up. A light duty battery-powered EV (BEV) powertrain requires 60kg of copper. A medium-duty BEV requires 139kg, while a heavy-duty BEV needs a whopping 425kg of copper. 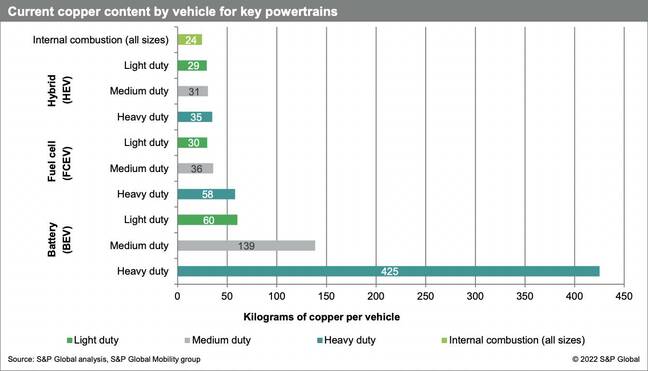 The kilograms of copper needed for different types of vehicles

The obvious solution to this inevitable problem would be to open more copper mines. That would definitely help offset coming shortages, but the catch is that those offsets would come too late.

“It currently takes 16 years, on average, to develop a new mine, meaning that a new mine seeking permission today would not become productive in time to accommodate the demand spike,” S&P said, quoting an IEA study.

Substitution of other metals – like aluminum – and recycling of copper reportedly won’t be enough to meet projected demand either, S&P’s data shows.

Demand is already high too. Copper, often considered an economic bellwether due to its use in multiple industries, spiked in price at the start of the COVID-19 pandemic.

Yet like other industries in the pandemic, copper prices have now dropped to late-2020 prices; another indicator of wider economic contraction.

If the world makes the leap from oil to batteries, copper shortages could also cause problems far beyond the manufacturing industries: The S&P report predicts copper “may emerge as a key destabilizing threat to international security.”

The study’s predictions are based on two model scenarios, one that makes optimistic assumptions about mining and refining capacity and recycling, and another that projects the current copper industry into the future.

Daniel Yergin, vice chairman of S&P Global, said that 2050 net-zero goals will be difficult to meet. “The world has never produced so much copper in such a short time frame as would be required. On current trends, the doubling of global copper demand by 2035 would result in significant shortfalls.”

Were things to continue as is, S&P predicts shortfalls reaching 10 million metric tons by 2035. By 2050, the world would only be producing 20 percent of the copper needed to meet net-zero goals.

Under its optimistic plan, deficits would still be present, but much smaller. The world would only need 1.6 million metric tons in 2035. Under either scenario, S&P said supply required to meet net-zero demands simply isn’t there.

Does S&P have any tips for avoiding disaster? No, it’s making no policy recommendations, only contributing to the dialog on how to reach 2050 net-zero goals.

It does, however, mention a series of operational challenges hindering growth in copper production. Infrastructure limitations, permitting and litigation, demands of local stakeholders, environmental standards, taxes and regulation, contract politicization, labor relations and resource nationalization strategies are all cited as roadblocks.

“Unless new supply for the metal of electrification comes online in a timely way, with clear political support and strategic commitment, Net-Zero Emissions by 2050 will likely remain out of reach,” the report said. ®