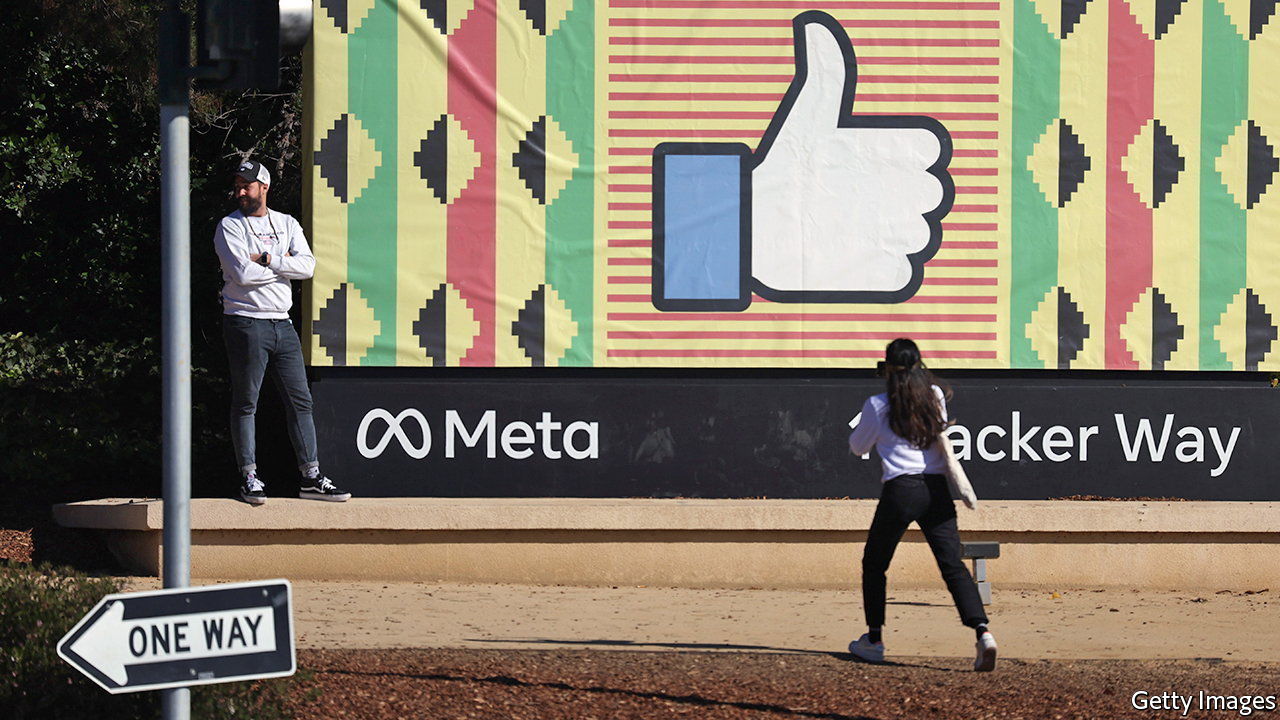 THERE COMES a time in every great bull market where the dreams of investors collide with changing facts on the ground. In the subprime boom it was the moment when mortgage default rates started to rise in 2006; in the dotcom bubble of 2000-01 it was when the dinosaurs of the telecoms sector confessed that technological disruption would destroy their profits, not increase them. There was a glimmer of a similar moment when Meta (the parent company of Facebook) reported poor results on February 2nd, sending its share price down by 26% the next day and wiping out well over $200bn of market value. That prompted a further sell-off in technology stocks.

Along with low interest rates, a driver of America’s epic bull run of the past decade has been the view that big tech firms are natural monopolies that can increase profits for decades to come with little serious threat from competition. This belief explains why the five largest tech firms now comprise over 20% of the S&P 500 index. Now it faces a big test.

Since listing in 2012 Meta has exemplified big tech’s prowess and pitfalls. For a glimpse of the caricature, consider the American government’s antitrust case against it first launched in 2020. It describes an invincible company in a world where technology is perpetually frozen in the 2010s: “this unmatched position has provided Facebook with staggering profits,” America’s Federal Trade Commission wrote in its lawsuit.

Examine the firm’s fourth-quarter results, though, and its position seems rather vulnerable and its profits somewhat less staggering. It comes across as a business with decelerating growth, a stale core product and a cost-control problem. The number of users of all of Meta’s products, which include Facebook, Instagram and WhatsApp, is barely growing. Those of the core social network fell slightly in the fourth quarter compared with the third. Net income dropped by 8% year on year and the firm suggested that revenue would grow by just 3-11% in the first quarter of 2022, the slowest rate since it went public and far below the average rate of 29% over the past three years—and below the growth rate necessary to justify its valuation.

Meta’s troubles reflect two kinds of competition. The first is within social media, where TikTok has become a formidable competitor. More than 1bn people use the Chinese-owned app each month (compared with Meta’s 3.6bn), a less toxic brand that is popular among young people and superior technology. Despite attempts by Donald Trump to ban it on national-security grounds while he was president, TikTok has shown geopolitical and commercial staying power. Just as the boss of Time Warner, a media behemoth, once dismissed Netflix as “the Albanian army”—an inconsequential irritant—Silicon Valley and America’s trustbusters have never taken TikTok entirely seriously. Big mistake.

The second kind of competition hurting Facebook is the intensifying contest between tech platforms as they diversify into new services and vie to control access to the customer. In Facebook’s case the problem is Apple’s new privacy rules, which allow users to opt out of ad-tracking, in turn rendering Facebook’s proposition less valuable for advertisers.

So are Meta’s problems a one-off or a sign of deeper ructions within the tech industry? Strong results from Apple, Alphabet, Amazon and Microsoft in the past two weeks may lead some to conclude there is little to worry about. Apple’s pre-eminence in handsets in America and Alphabet’s command of search remain unquestionable. Yet there are grounds for doubt.

The competition between the big platforms is already intensifying. The share of the five big firms’ sales in markets that overlap has risen from 20% to 40% since 2015. Total investment (capital spending plus research and development) for the quintet has soared to $300bn a year, as they search for new vistas such as virtual-reality metaverses or autonomous cars. These promise growth but will also lead to more overlap, disrupt existing products and depress short-term returns. Meanwhile, venture-capital funds invested $600bn last year. Some of this will go up in smoke, but some will finance competitors who will eventually pose a threat.

And, if you look closely, pockets of strain are emerging beyond social media. Video-streaming has turned into a bloodbath as half a dozen firms throw huge sums at a cash-hungry business that has few barriers to entry. According to the Wall Street Journal, customer churn has exceeded 50% for some streaming services in just six months, one reason why Netflix’s share price has dropped by 33% so far this year. Some other aspiring tech platforms are showing signs of stress: Spotify said this week that subscriber growth would slow down and PayPal walked away from its goal to have 750m users by 2025.

Even in e-commerce, where Amazon remains pre-eminent, serious challengers such as the supermarket giants (Walmart and Target) or rival online platforms (Shopify) are making their presence felt. In any case, Amazon’s thin margins and vast investment levels suggest that consumers may be getting a better deal than investors. Although a strong showing from the cloud division divulged on February 3rd may buoy the e-empire’s market value by more than half as much as Meta lost, the cloud business is unlikely to stay as lucrative for ever. Alphabet, Microsoft and Oracle are already trying to compete away some of Amazon’s lofty cloud margins.

Meta’s mishaps signal that two changes need to happen, although only one will. One relates to Mark Zuckerberg, its leader and pantomime villain. He is pushing for a leap into the metaverse in which the firm is now investing $10bn a year. His reputation with shareholders rests on successfully completing similarly bold moves in the past: the acquisitions of Instagram and WhatsApp in 2012-14 and a shift from desktop to mobile around the same time. The trouble is that Mr Zuckerberg’s and his firm’s toxic reputation will impede its expansion into new terrain: its plan for a digital currency flopped because governments objected (this week the venture announced that it was winding down). Mr Zuckerberg is a liability, but controls Meta’s voting rights, enjoys a pliant board and so is probably going nowhere.

The second change involves how investors and governments think about big tech, and indeed the stockmarket. The narrative of the 2010s—of a series of natural monopolies with an almost effortless dominance over the economy and investment portfolios—no longer neatly reflects reality. Technology shifts and an investment surge are altering the products that tech firms sell and may lead to a different alignment of winners and losers. And, as in previous booms, from emerging markets to mortgages, high returns have attracted a vast flood of capital, which in turn may lead to overall profitability being competed down. Given the enormous weight of the technology industry in today’s stockmarkets, this matters a great deal. And the mayhem at Meta shows it is no longer just an abstract idea.